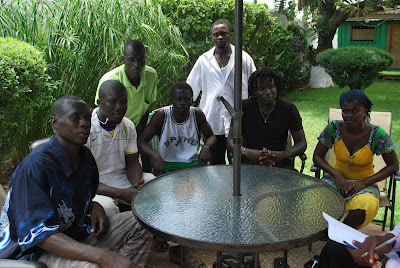 Some of the returnees at Daily Guide.
Posted on: www.dailyguideghana.com

Wednesday March 16, 2011.
After surviving the blazing guns of Libyan strongman Mummar Gaddafi, some Ghanaians fleeing the deadly carnage in the conflict stricken oil rich North African country landed on home soil but were swiftly arrested by the security agencies.

Information available to Daily Guide indicates that about 18 returnees have been detained by the police upon reaching the Kotoka International Airport, Accra and distributed to various police stations in the city.

Baba Jamal, a deputy Minister of Information confirmed the arrest but said he knew only eight people.

Their offence it was gathered is that they were alleged to have embarked on a demonstration in the Libyan capital Tripoli against the Ghana Embassy and vandalized property and that may have triggered their arrests.

However, some of the returnees yesterday told Daily Guide that the embassy staff allegedly passed false information to the government that those who took part in the demonstration were New Patriotic Party (NPP) supporters.

Hussein Swala, 29 and Rafiu Muktar, 26 who arrived on March 12, 2011 on board a Bangladeshi Airline which was chartered by the government to evacuate the stranded Ghanaians on arrival at KIA said “the security detail at the airport has a list of people they are looking for and once you disembark they ask you to stand aside after which you are sent to the police station to be detained.”

They said some of their colleagues have been in detention between three days and one week without any interrogation or charge or court appearance and added that due to congestion in the Airport Police Station cell, they are now being distributed to other stations in the metropolis.

They mentioned Aziz Adam and Abdul Wahab Suleman, 24 as some of the detainees saying “a lot more are in custody and nobody is saying anything. The police keep tossing you when you make enquiries about their detentions.”

Mohammed Seidu, 45 a resident of Benghazi who got the chance to escape earlier said his brother has been detained for six days saying “when you visit him he tells you that nobody is attending to him”.

Narrating their ordeals, the two said they slept at Tripoli Airport for more than three weeks before they got the chance to fly to Ghana saying “it is a precarious situation over there.”

The accused the Embassy officials of neglecting stranded Ghanaians and claimed the staff took between $40 and $200 before being allowed to board the plane.

“We slept on the ground at the airport and the Embassy officials would come around clandestinely and put other people on board the planes and as it continued the Libyan security asked us to demonstrate against the embassy to end the discrimination.”

“When you go to the embassy they will sack you and ask you to go to the airport. You have to pay bribe before you are given Travelling Certificate (TC)”, they alleged.

They claimed “because the government would find out about their deeds, the embassy sent advanced message to the government that those who demonstrated are NPP supporters.”

Daily Guide’s investigation at some of the police stations indicated that some of the detainees have indeed been transferred from Airport Police Station to other facilities.

A source at Kotobabi Police Station confirmed that some of the detainees have been brought there and said it is the Airport Police that is coordinating the arrests.

When reached on telephone, Baba Jamal, a Deputy Information Minister confirmed to Daily Guide that some of the returnees have indeed been detained but said he knew about eight people.

He said two were detained about four days ago and six more were arrested on Monday, saying that the detainees were identified by their colleague returnees as those involved in vandalizing the Ghana Embassy in Tripoli.

The Deputy Minister said apart from vandalizing the embassy and harassing the staff, the suspects also damaged the windscreen of the Ghana Embassy vehicle saying “the offence was committed on Ghana’s soil in Libya.”

Baba Jamal said counter reports from the embassy indicate that the bribery allegation leveled against the staff could not be substantiated.

He said 10, 158 Ghanaians have been evacuated by the government from Libya so far and that there were four more flights to come adding that if there is a backlog the government would plan for them.

The Deputy Minister’s account shows clearly that more than the estimated 10, 000 stranded in Libya since clashes broke out between government forces and rebels who are fighting to end the 42-year rule of Col. Muammar al Gaddafi.

Meanwhile other media reports indicate that the returnees are appealing to the government to ensure that they receive their belongings from Libya as promised them.

The returnees, who are being hosted at the El-Wak Sports stadium, said they have waited for over 2weeks in expectation of receiving their luggage but to no avail.

In an interview with Peace FM, some of the evacuees recounted their experiences since arriving in Ghana, claiming they have not been given food, water no mattresses to sleep on.
Posted by Ghana on the move! at Wednesday, March 16, 2011