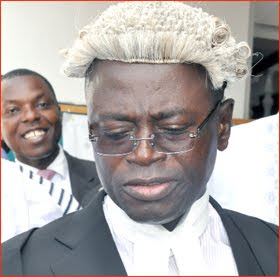 Monday July 19, 2010
YONI KULENDI, one of the finest lawyers in the country has said the attempt to prosecute Dr. Charles Yves Wereko-Brobby aka Tarzan and Kwadwo Okyere Mpiani for causing financial loss to the state in the matters of Ghana@50 is nothing but “a recipe for judicial chaos”.

Dr. Wereko-Brobby, a former Chief Executive Officer of the defunct Ghana @50 Secretariat and Mr. Mpiani, former Chief of Staff in the erstwhile NPP administration and also the Chairman of the National Planning Committee for the celebration have been put on trial by the National Democratic Congress (NDC) government for the various roles they played during the 50th Independence Anniversary and the 2007 African Union Summit hosted by Ghana.

At their maiden appearance, the two accused persons pleaded not guilty to four counts of willfully causing financial loss to the state and were granted GH¢ 35 million self-recognizance bail.

Moving an application for an order to strike out and dismiss the charges against Mr. Mpiani in Accra last Friday, Mr. Kulendi his counsel said “what the prosecution is seeking to do is unlawful, not warranted by law and gross violation of the rights of the parties.”

“This court in terms of the constitution has no jurisdiction to entertain this prosecution. There is not much disagreement as to the facts that ground this present proceeding.”

He said Clause six of White Paper issued by the government specifies clearly the legal basis of the election of the government to constitute a Commission of Enquiry after which the final report becomes a High Court judgment adding “the election of the Republic to mount this prosecution clearly offends the letter and spirit of Article 278 and other relevant authorities.”

Mr. Kulendi said since the constitution guarantees Dr. Wereko-Brobby and Mr. Mpiani the right to contest the Ghana @ 50 Report at the Court of Appeal they “intended to exercise the automatic right of appeal”.

He said if the Fast Track High Court goes ahead to try the case it will be usurping the authority of the Court of Appeal and thereby contravene Article 136 (5) of the Constitution.

Counsel at this juncture had to cut short his argument because the prosecution led by Chief State Attorney, Anthony Gyambiby had filed a supplementary affidavit which contradicted the substantive affidavit in opposition to strike out the case.

The court presided over by Justice Samuel Marful-Sau of the Court of Appeal had to adjourn proceedings to July 27, 2010 to enable the prosecution to put its house in order and for Mr. Mpiani to verify from the government publisher the date on which the report was published.

Dr Wereko-Brobby on June 27, 2010, moved a similar motion on notice to strike out charges preferred against him long before the supplementary affidavit to oppose the applications was filed.
Posted by Ghana on the move! at Monday, July 19, 2010