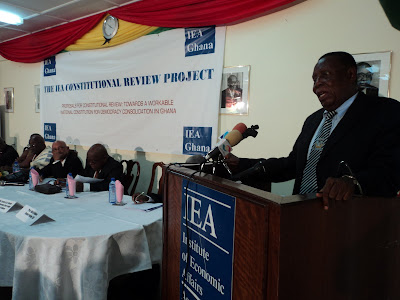 Prof. Justice A. Paaku Kludze is a retired Supreme Court judge in Ghana.

He however admitted that there are “drawbacks” in the panel system but said “if we abandon this system we will be confronted with backlog of cases. We should rather work hard to find solutions to the problems associated with the system to ensure speedy delivery of justice.”

The panel system currently in use by the Supreme Court is the situation where all the justices of the highest court of the land do not sit on all cases argued before and decided by the Supreme Court. On each occasion the Constitution empowers the Chief Justice to select justices who should decide the case.

Prof. Kludze was delivering a lecture in Accra on Tuesday on the topic “The panel system at the Supreme Court: Merits and demerits.”

The round table discussion was organized by the Institute of Economic Affairs (IEA), a policy advocacy think tank as part of the institute’s effort to undertake research and advocacy on certain provisions of the constitution that in its view require review.

Prof. Kludze said the merits of the panel system far outweigh the other system where all Supreme Court judges sit on every case that is brought before them saying “the panel system means that no particular judge can anticipate that he or she will sit on a particular case”.

“Selection to the panel is left to the sound judgement of the Chief Justice. A justice who has been selected for a panel can recuse himself or herself for good reason, but one cannot ask to be included on the panel for a particular case.”

He also said the panel system ensures expeditious disposition of cases arguing “because the entire membership of the Supreme Court would not sit on all cases, several cases can be adjudicated by different panels within the same time frame.”

The law professor said where the Supreme Court sits in panels its work may not necessarily be disrupted by the disqualification or recusal of a particular justice, saying “ a justice may recuse himself/herself because he knows the parties or has direct or indirect interest in the outcome of the case.”

He said on the contentious issue of packing the courts it is the panel system that can help to “neutralize the effects of an attempt the Supreme Court with favoured justices saying “the panel system whatever may be its drawbacks, is one of the provable mechanisms for resisting the harmful effects of any attempt to manipulate a Supreme Court by the addition of unqualified persons of questionable integrity to advance a political or other agenda.”

Prof. Kludze said in spite of the numerous merits the system it is still not perfect because of the acceptability of panel decisions by some people including lawyers, conflicting decisions of panels, risk of improper influence of panels, possible manipulation by the Chief Justice.

He said the Chief Justice has been given “too much” authority under the panel system and needed to be “restricted” saying “I do not know how it can be done but it has to be done so that the arbitrary elements in the empanelling of judges is reduced.”

Justice Francis Emile Short Commissioner of the Commission on Human Rights and
Administrative Justice (CHRAJ) who chaired the function said there is a “compelling argument that all judges must sit when the matter involves the interpretation of the Constitution.”
Posted by Ghana on the move! at Thursday, July 22, 2010