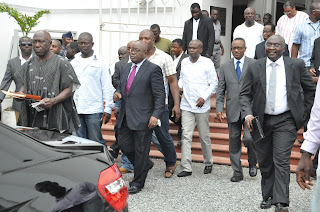 There was drama yesterday at the Supreme Court when Electoral Commission (EC) Chairman Dr. Kwadwo Afari-Gyan told the packed court that he was confused, after he had been asked to define over-voting.

“I think I am not too clear in my own mind what the connotation of over-vote is,” Dr. Afari-Gyan said, to the bewilderment of the audience at the ongoing Presidential Election Petition.

The EC Chairman, before the election, is on record to have defined over-voting which is one of the irregularities being challenged by the petitioners but in the witness’ box yesterday, he gave another definition which he said was ‘classic.’

Over-voting Definition
Continuing his evidence-in-chief, Dr. Afari-Gyan who is being led in evidence by James Quarshie-Idun - the EC’s lead counsel – shifted from his long-held definition that over-voting occurs when the number of votes cast exceeds the number of ballots issued to voters.

He then appeared to give another definition which says that over-voting occurs when the number of votes cast exceeds the number of registered voters and said he was relying on that one. 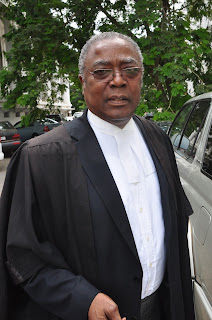 Judge’s Query
The moment the Commissioner said “I think I am not too clear in my own mind what the connotation of over-vote is,” but one of the justices on the nine-member panel Paul Baffoe-Bonnie queried him: “But “you are the boss?”

He then offered to throw more light on his definitions by going back to the definition provided by the respondents and sought to attack his own widely-held definition which was also relied on by the petitioners saying their (petitioners) definition was based solely on the pink sheet.

“My Lord I have a problem with any definition which limits over-voting exclusively to what is on the face of the pink sheet," he said, adding “over-voting is not determined using pink sheets but by using the biometric verification machine.”

Justice Baffoe-Bonnie appeared to disagree with Dr. Afari-Gyan’s new-found definition saying that it was not possible for a polling station to record 100 per cent turnout.

“A voter may be dead or simply unavailable to vote,” he said.

Dr. Afari Gyan however insisted that for now, he was sticking to his ‘classical definition’ where he said over-voting should be defined as the situation of over-voting occuring when the number of votes cast exceeds the number of registered voters. 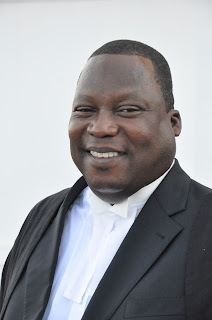 Either or situation
Mr. Quarshie-Idun then handed over to Dr. Afari-Gyan, a particular pink sheet containing figures in the accounting column and the column for accounts on voting without biometric verification that did not add up.

The EC Boss tried to explain the anomaly, indicating that some numbers could be ignored or substituted for others.

Witness: …I think the way to verify this; settle this is an either or situation. It would be by recourse to the biometric verification device. … (Justice Baffoe-Bonnie steps in to seek clarification)

Justice Baffoe-Bonnie: Dr, I still have a problem with this [explanation]. If this paper has been put in to indicate that some people in the polling station voted without biometric verification, you are trying to explain that situation by this either or situation, but you haven’t been able to really explain if it is put in a situation of over-voting , you still don’t get your answer to that.

Witness: No, that [over voting] is a different issue altogether, but I’m explaining here, we have the same figure occurring three times.

Justice Baffoe-Bonnie: So that one, you are saying that it is possible that the C3 only shows that they lifted it from C1, it is possible? 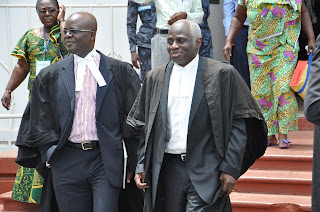 Witness: Yes, my lord, we would come to the over-voting…If you are satisfied that no other errors have been committed; there would be an excess of votes….

The Bombshell
Witness: There would an excess of votes. The point that I’m making for the time being is that, if you have this figure occurring three times-in C1, in C3 and as the total votes-, it means either all the persons were verified or none of them was verified…

Justice Baffoe-Bonnie: That one we’ve got it [understood].

Witness: Yes, as for the over-vote there would be an excess. I think I’m not too clear in my own mind what the connotation of over-vote is…. (Court room audience burst into laughter). At this…I think it is something that is subject to further clarification my lords…

Justice Baffoe-Bonnie: But you are the boss?

Witness: (Laughs uneasily)… Yes. Okay my lords; the classical definition of over-vote is where the ballot cast exceeds the number of persons eligible to vote at the polling station. Or if you like, the number of persons on the polling station register, that is the classical definition of over-voting. Two new definitions have been introduced; there’s nothing wrong with that, but I have problems with these two new definitions that have been proposed.  The problem I have with the whole definition is that they limit themselves exclusively to what is on the face of the pink sheet. They limit themselves, as I understand the definition…(Justice Dotse seeks clarification) 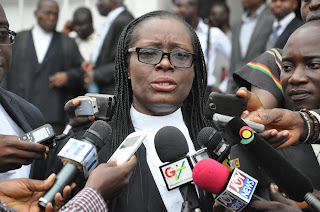 Witness: ….Well, by the petitioners. Two definitions of over-voting: One, where the number of ballots cast, exceed the number of voters as indicated on the face of the pink sheet… (Justice Baffoe-Bonnie interrupts)

Justice Baffoe-Bonnie: Dr, all this while, we are dealing with the pink sheets; in one breath, the pink sheet is your reference point, so in this case, just lets limit ourselves…I heard you say is an excess vote or something?… 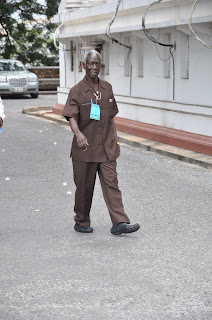 Justice Dotse: Who then does the correction you are talking of?

Witness: Well, if I were to read this document, the [presiding officer]. He’s given a serial range of numbers which suggest that they’ve been given 325 and he has actually conducted an election involving 198 people, then I would be inclined to take the 325 as the correct representation and not the four.

Justice Baffoe-Bonnie: In that case, the correction is done with resort to other figures on the pink sheet, which you say can also be wrong. But in the in other case, what you are saying is that you have to make recourse to the register which means that for example the accounting information “What is the Number of Ballots Issued to Voters on the Polling Station Register?”  You see, we have a situation where we have the polling station register and we have a question which says the number of people who have been issued with. If you have to make recourse to the register, then we don’t even make room for people dying or people not voting….you see, on the voters’ register, we may have 100, but we may - as you already aware with your 34 years (experience)-, you would realize that there is hardly a 100% voting in any situation, so if you say that over-vote is only when it is above the number of people in the register, that is really something…. 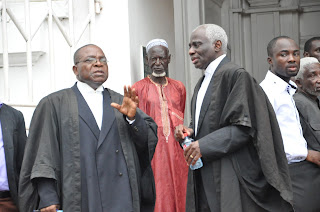 Witness: Your lordship, I have not said over-voting is only when (there are more votes than in the register) I said the classical definition; I said that was the classical definition. Now we have adopted a new technology and we’ve spend a lot of money in buying that technology, that technology should help us to modify our definition of over-voting. I am making a technical point that when you limit it only to what is on the face of the pink sheet, then I have a problem with it.

The EC Chairman said that anytime an election official is confronted with and ‘odd’ situation, that official has to refer to all other aspects on the pink sheet to be able to ascertain the truth.
Posted by Ghana on the move! at Tuesday, June 04, 2013