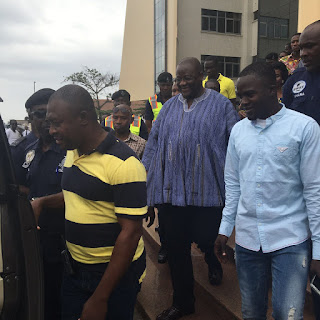 Mr. Afoko leaving the court after the judgement

A human rights court in Accra presided over by Justice Anthony K. Yeboah, yesterday affirmed the indefinite suspension of Paul A. Afoko as the National Chairman of the New Patriotic Party (NPP).

In what looks like a massive boost for the party - as it prepares for Election 2016 in December - the court said the NPP did not breach its constitution in suspending Mr. Afoko.

Justice Yeboah said Mr Afoko failed to prove that the party erred in suspending him, saying the party acted fairly and lawfully in its decision to suspend him.

Final Blow
“Taking into account all the available evidence and on the balance of probability, the plaintiff’s (Afoko’s) action fails. His claims for reliefs are dismissed,” Justice Yeboah said in his 85-page judgement that lasted more than two hours.

“The plaintiff should remain as the indefinitely-suspended Chairman of the first respondent (NPP),” the court declared.

It also held that not only is Afoko suspended as an officer (National Chairman) of the NPP, but also as a member of the party - per the judge’s interpretation of the NPP constitution.

Afoko ‘Dazed’
For a couple of  minutes, Mr. Afoko, who appeared ‘dazed’ by the judgement, remained glued to his seat in the courtroom, even after the judge had retired to his chamber. The plaintiff was later ushered out by the police to his Nissan Patrol 4X4.

In fact, Mr. Afoko lost all the reliefs he brought to court for his reinstatement.

Main Action
Mr. Afoko had sued the NPP and its Acting National Chairman, Freddie Blay, who is also the First National Vice Chairman of the party after he was suspended indefinitely in October last year.

The party’s Disciplinary Committee (DC) had recommended his suspension after a petition by two members of the NPP; and Mr. Afoko wanted the court to order his re-instatement as the National Chairman because he claimed that the party’s action was unconstitutional.
A similar case instituted by Sammy Crabbe, the suspended 2nd Vice Chairman, was thrown out by another human rights court for lacking merit.

Mr Afoko was accused by his party of working behind the scenes to block the party’s chances of winning the December 7 elections.

Detailed Analysis
The judgement covered areas like what the judge called procedural antecedence, jurisdictional evidence, the issue of bias claimed by Afoko, the issue of appointment versus representation, internal dispute resolution mechanism, political decision, unlawful suspension, conduct of Mr. Afoko vis avis the affairs of the party, suspension letter, the word ‘refer,’ stay of execution, among others.

Suspension Or Expulsion?
Justice Yeboah said that all the provisions that deal with suspension or expulsion from the NPP had been clearly articulated in the party’s constitution in Articles 4 (3) (d), 4 (3) (d) as well as Article 10.

He said a cursory look at Articles 4 and 10 showed that there was no ‘redundancy’ to be addressed as pushed by Mr. Afoko because where the issue involved removal of an officer, Article 10 was there to cater for it; and where it involved suspension, Article 4 had been set out and added that there was a clear difference between interim suspension and removal from the party.

The court said that the allegation of bias raised by Mr. Afoko against Alhaji Rahman, a member of the National Disciplinary Committee that had recommended the suspension, could not be substantiated and also added that the plaintiff again failed woefully to lead any evidence of bias against Prof Mike Oqcuaye and Madam Ama Bema Busia, who are elders of the party and members of the Disciplinary Committee.

The court said the party did not breach any rules when its parliamentary group sent Gifty Eugenia Kusi, MP for Tarkwa Nsuaem, to represent it (group) on the Disciplinary Committee, saying “Nowhere does the NPP constitution say that Gifty Eugenia Kusi has to be approved.

“The plaintiff could not put a finger on any clause that says that Gifty Eugenia Kusi is not qualified and only relied on conventions and practices.”

Minutes of meeting
The court further held that Mr. Afoko failed to provide evidence that the minutes of the National Council meeting recorded by one Edmund Tettey was authentic after it was challenged by NPP witness, Peter Mac Manu.

The court affirmed the hearing of October 21, 2015 where the decision to suspend Mr. Afoko was concluded by the Disciplinary Committee and said the 6 and 12 October sittings were indeed used to take evidence, adding that “there has not been any demonstrable effort by the plaintiff to say the delay after the 21-day ultimatum constituted a miscarriage of justice.”

The Drama
The judge, who started reading the long judgement with a quotation from Sheldon Wolin's ‘Politics and Vision,’ told the packed court that he deliberately put off his telephone, starting from last Friday to avoid any ‘distraction.’

It looked like Mr. Afoko was anticipating victory because a number of his supporters who stormed the court’s premises wore T-shirts with an embossed photograph of the suspended Chairman in front and an inscription: “Paul Afoko the symbol of normalcy in NPP,” at the back.

There was massive police and national security presence both inside and outside the court and anybody who tried to enter the courtroom was thoroughly questioned.

NPP Lawyer
After the judgement, the NPP lawyer, Godfred Yeboah Dame, told the court that he did not intend to press for cost against Mr. Afoko for the sake of unity of the party.

In fact, there was no spontaneous jubilation by the NPP supporters who were in court. It was rather Mr. Afoko’s followers who looked ruffled at the turn of events.

Appeal
Mr. Afoko had reportedly issued a statement through his spokesperson, Nana Yaw Osei, to the effect that he was studying the judgement and hinted of a possibility of an appeal against the decision.

Minutes after the judgement, the suspended Chairman said he disagreed with the court’s decision to dismiss his case.

Nana Yaw Osei, in the statement, indicated that Mr. Afoko’s legal team was considering an appeal against the decision.

“…lawyers for Mr. Afoko will carefully study the judgment and launch an appeal against the decision at the appropriate time,” it indicated.