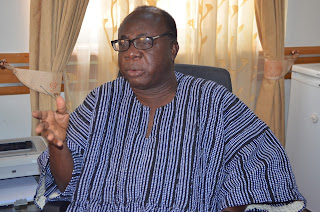 The opposition New Patriotic Party (NPP) and the governing National Democratic Congress (NDC) are at war over the mode of transmission of election results for the December 7 polls.

While the NPP has accused the Electoral Commission (EC) of acting unilaterally in the issue concerning the transmission of results electronically, the NDC claims that it is satisfied with the process and has rather blamed the NPP for acting in bad faith.

NDC General Secretary, Johnson Asiedu Nketia told journalists in Accra yesterday that the government had already procured scanners for the EC to enable it to transmit the results.

However, NPP Campaign Manager, Peter Mac Manu, who represents the party at the Inter-Party Advisory Committee (IPAC), explained that the party was not against electronic transmission but rather against the EC inviting companies to bid for the transmission of electoral results electronically as it (EC) advertised in the newspapers, saying that what the party advocated were hand-held scanners.

That he said, should not involve any external company to warrant any bidding process.

In a follow-up interview, NPP acting National Chairman, Freddie Blay, discounted criticism from the quarters of both the EC and the NDC that the opposition party was pretending not to know about the commission’s plans to introduce electronic transmission of results.

“Nobody in the NPP has said that the party is not aware of plans by the EC to introduce e-transmission of election results. What we are complaining about is that in the latter stages the party is being kept in the dark as to the processes involved in the transmission,” Mr. Blay told DAILY GUIDE yesterday.

The EC had also issued a statement insisting that the NPP, through Peter Mac Manu as member of the Legal Committee of the IPAC, was involved in drafting C.I. 91 and C.I. 94 where Electronic Results Transmission System (ERTS) was included.

But the NPP says there is no law backing e-transmission of results.

Mr. Blay insisted that the processes have to be transparent.

He underscored, “The EC had indicated earlier (before I assumed this position) that they could consider e-transmission for the election and the party and other stakeholders agreed in principle.”

“However, what we are currently witnessing is that the party is not getting the needed information on how things would be done. I believe that this should not be the sole preserve of the EC. The commission should be able to let Ghanaians know all the processes involved in the transmission of the results.”

“How are the results going to be transmitted…Is it from the polling stations or the collation centres? Are we going to have it from regional to the headquarters? We need to know the modalities involved before we can vouch for the process.”

Mr. Blay said that if the EC insists on e-transmission then the processes involved have to be transparent, insisting, “We all heard about trans-positional errors in the past and we do not want to encounter such scenarios again.”

He said the NPP wants the EC to explain to the public at what stage of the transmission process could a stakeholder get involved. “We want a situation where we can have the opportunity to verify what is being transmitted and not be asked to wait until everything is done before you are asked to go to court,” he stressed.

The acting Chairman added that it is not in doubt that Information Technology (IT) has become the mainstay of doing all sorts of businesses and executing transactions, but it is also a fact that e-transmission could lend itself to abuse saying, “Let nobody tell us e-transmission can’t be tampered with. We refuse to accept that.”

He also said that the tendering and short-listing of companies to be contracted for the e-transmission projects had not been made known to the party, adding, “We only got to know about it recently that five companies have been selected for a final session.”

“The EC has not been able to tell us the mechanisms to protect the process. This is the first time we are getting involved in this sort of arrangement and the processes should not be shrouded in secrecy. We must not be seen to be disappointing the people of Ghana.”

“If you (EC) want us to agree with you then the processes must also be thoroughly explained to us. It must be demonstrable and the end product must be verifiable.”