Contradictions at Ya Na Trial 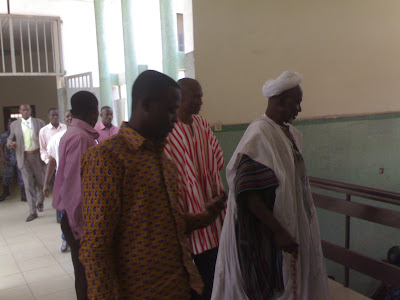 Some of the accused persons leaving the court premises under security escort.

Tuesday October 5, 2010
Prosecution Witnesses (PWs) appearing in the trial of 15 persons including the former District Chief Executive (DCE) of Yendi under the previous New Patriotic Party (NPP) for the murder of Ya Na Yakubu Andani II, overlord of Dagbon continue to contradict each other’s evidence before the Fast Track High Court, presided over by Justice E.K Ayebi of the Court of Appeal.

On September 12, 2010, Abukari Amadu, the first Prosecution Witness (PW1) told the court that when a letter that imposed a curfew on Yendi was brought due to the Bugum (Fire) Festival the Ya Na invited the DCE, Mohammed Habib Tijani (8th accused) several times to come and explain the decision but he (DCE) did not honour the invitation before the Ya Na invited the then Regional Minister, Prince Imoro Andani to the Gbewaa palace to explain the decision.

He said that the Minister explained issues to the Ya Na and asked for permission to confer with the Abudus over the issue and when he (Minister) returned to the palace to brief the Ya Na again he was in the company of the DCE who was holding a talisman and wearing a yellow T-shirt.

But when he took his turn yesterday, the sixth prosecution witness (PW6) Iddrisu Mutawakil, listed as PW7 on the bill of indictment, contradicted PW1’s evidence, insisting that the Regional Minister did not come back to the palace with the DCE.

“I was with the Ya Na throughout when the Regional Minister returned to brief the Ya Na he (Minister) was with two people but the DCE was not among them.”

All the 15 accused persons, except Zakaria Yakubu aka Zakaria Forest, the seventh suspect who is currently at large, were in court.

They have all pleaded not guilty to conspiracy and with Forest (A7) facing an additional charge of murder.

They are currently on remand except Iddrisu Iddi aka Mbadugu due to old age.

Led in evidence by Solomon Atadi, Principal State Attorney, Mutawakil, who could explain issues in English but insisted on speaking Dagbani, said on March 27, 2002, a telephone call came in and it was one Nantongma Andani who picked up the call, adding that he warned them to vacate the palace because they were going to be killed contrary to evidence of PW1 that he (Abukari Amadu-PW1) had picked an unknown phone call and the person, who indicated that he was Abukari, asked the Ya Na to leave the palace because the Abudus were going to kill him.

Mutawakil, a voluntary teacher said he was at the palace throughout the siege and did not hold a weapon or fire a gun but at the Wuaku Commission (the commission set up by President Kufuor to investigate the killing of the Ya Na and his elders) where he testified as the 17th Witness he had said he carried a cutlass to face the Abudus.

He said at no point did the Ya Na order inmates of the palace to fire at the Abudus, saying, “I was with the Ya Na throughout and he asked us not to go anywhere,” contradicting the evidence of the other witnesses that the Ya Na, when the fighting intensified, ordered them to fire and kill the Abudus.

Counsel (Phillip Addison): At the time you heard the Abudus shooting where were you?

Witness: I was in the palace.

Counsel: And you heard the Abudus shooting

Counsel: So at no time did inmates in the palace come outside to shoot back.

Witness: Others were shooting. Some were inside the palace others were outside.

Counsel: Did Ya Na direct you to go out and meet the Abudus?

Witness: He did not say so.

Counsel: So the youth came out to fight by themselves without anybody directing them.
Witness: Yes, but I was not firing.

He claimed that he saw the DCE in local bullet proof attire sitting on a motor bike and leading an armour car, which passed behind the palace and moved towards the Bolinlana’s palace and moments later, the Abudus started firing again contrary to his evidence at the commission that he only saw an armour car which passed several times and never mentioned that the DCE was sitting on any motorbike.

He also told the court in his evidence-in-chief that he was shot in the neck and showed the court what he says are scars of the on his neck but never told the commission about it and when counsel wanted to find out why he did not tell the commission,

He replied “I said and it was the commission that did not write all that I said.”

Counsel: Your testimony at the Yidana trial was rejected.

Witness: I cannot compel the court to accept my evidence.

Counsel: Your evidence that was rejected at that trial, you are bringing it here to testify against these 15 people.

Witness: I am giving my testimony.

Sitting continues today.
Posted by Ghana on the move! at Tuesday, October 05, 2010