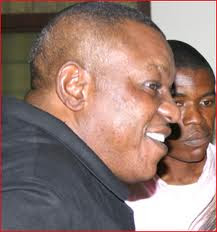 Alhaji Iddrisu Bature is becoming a crtic of the Rawlings'

The law professor has barely served two years of his first term in office yet ardent supporters of the former First Lady seem hell-bent on elbowing President Mills in his quest to get a second term as President of Ghana and he has to either fight his way to satisfy his ambition or get ready to be chopped off.

Jaws dropped in several parts of the country on Sunday, October 24, 2010, when 2012 campaign posters of the former First Lady popped up like mushrooms on several walls and poles in major towns and cities in all ten regions of the country, with a group of foot soldiers of the NDC claiming responsibility.

The pasting of the posters coincided with the October 21, 2010 letter “bomb” thrown by the NDC founder, JJ Rawlings accusing President Mills of institutionalizing corruption in the country.

Although Nana Konadu has not spoken publicly, she has given ‘telling signals’ that she wants to lead the NDC to the 2012 polls and has been very vocal and consistent in denying reports that she has endorsed an Atta Mills candidature.

The clamour for Mrs. Rawlings to join the NDC presidential race by a group of party foot-soldiers has already sparked fire in the party, with foot soldiers and some leading members of the party at each other’s throat while various political analysts have predicted doom for the NDC.

Johnson Asiedu-Nketia, aka General Mosquito, the party’s General Secretary says it is not enough for Mrs. Rawlings to remain silent over the matter saying the former First Lady has to state categorically if she wants to contest the election.

He said “the impression being created is that here is a vice chairperson who is not prepared to go by the rules of the party and I don’t think that is a good campaign for her if she is interested to contest.”

In all these, Alhaji Bature, a leaning member of the party thinks Mrs. Rawlings has a burning desire to see President Mills fail miserably even if the NDC has to be sacrificed saying the former First Lady “is only pretending not to know about the ongoing campaigns in her favour.”

Speaking to Citi FM in Accra on Monday, Alhaji Bature said Mrs. Rawlings’ hatred for President Mills started in 2000, when the then candidate Mills bypassed her to select Martin Amidu, the current Minister of the Interior as his running mate, a position he claims, the former First Lady wanted.

“What many Ghanaians may not know is that, Nana Konadu just like Obed Asamoah has a serious aversion for the President. This began in 2000 when she was hoping to be selected as running mate. She and Obed Asamoah were looking forward to that job but Mills went in for Asamoah’s Deputy in the person of Martin Hamidu and Nana Konadu has never been enthused with Mills’ administration since then likewise Obed Asamoah.”

Asamoah eventually worked his way to become the Chairman of the NDC and made sure that he sabotaged Atta Mills’ intention of leading this nation until he Asamoah was removed.”

“In the case of Nana Konadu, at a point in time after 2001, she mellowed a bit hoping that in 2004, Mills would have selected John Mahama, which Mills didn’t do and went in for Mohammed Mumuni. She even invited Mills to a very close friend’s house to plead with him to consider John Mahama, which he (Mills) declined. Since then, she has never been happy with Professor Mills.

“In 2008, she hoped that Mills would fall to his knees but God was on his side and he has eventually become the President of this Republic. So Nana Konadu as a matter of fact, is yet to come to terms with the reality that apart from God, nobody creates a King”.

“She can never deny not being behind what is happening, at least not to the discerning minds. If you have a Party’s Vice Chairperson who is asked on a public platform to grade the performance of her Government and President, and she says she cannot do that except at an appropriate time, how can you distance yourself if today some people are purported to be calling on you?”

“Of late we all see what she has been doing in the Western and Central Regions, ostensibly working to revive her 31st December Movement, but in reality she is campaigning. But I can assure her of one thing; it is high time Nana Konadu dropped this idea very fast. They are fighting against the tide. The mood in the NDC will not countenance any attempt to derail the forward move of the party. What Konadu and her likes are trying to do is to break the front of the NDC so that the party will lose power in 2012.”

Asked whether the NDC could retain the seat in 2012, Alhaji Bature said it was a too early to determine but added that if Nana Konadu’s ploy to undo Mills and the arrogant posture of President Mills’ appointees do not change, 2012 could spell doom for the party.

‘First and foremost, I think that the posture of the members of Government is also very important. What Ghanaians detest most no matter how poor or vulnerable they are, are arrogant public officials. And you can see some arrogance of power creeping gradually and subtly into some members of government. These are more potent than what Konadu is doing. Konadu and Rawlings have no refuge apart from NDC" he noted.
Posted by Ghana on the move! at Friday, October 29, 2010