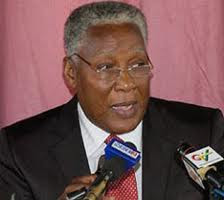 Monday October 25, 2010
Rita Owusu-Amankwa, a former programme manager of the National Programme for the Elimination of Child Labour (NPECLC) says the committee set up by Enoch Teye Mensah, Minister of Employment and Social Welfare to investigate operations of the programme was “a mere witch-hunting exercise” with the sole purpose of “tarnishing” her hard won reputation.

Mr. ET Mensah on April 22, 2010 inaugurated a five-member committee to investigate administrative, financial and technical operations of Aid for Change (AFC) Ghana an NGO, in relation to the NPECLC programme as well as the roles played by Mrs. Owusu-Amankwa and Vincent Frimpong Manu (AFC) in the effort to eliminate child labour in the cocoa industry between June 9, 2009 and March 1, 2010.

The composition of the committee which was given 10 days to complete its work but ended up spending 40 days had Dr. Francis Dakura (NDC MP for Jirapa) as its chairman with Colonel Rtd. Theophilus Tawiah (NDC), Eric Osei Afriyie (Internal Auditor at the Ministry), Edmund Siaw Akugbey (Personal Assistant to ET Mensah) and one Johnson Akuamoah Asiedu as members.

After completing its work, the committee whose membership is made up of only NDC sympathizers made findings that were materially different from the terms of reference for which it was set up.

Even though Mrs. Owusu-Amankwa and Mr. Manu were clearly the subject-matter of the committee’s investigations per the terms of reference, it did not deem it fit to furnish them with copies of the report; yet the ministry was able to spread the report among all stakeholders including development partners.

Mrs. Owusu-Amankwa said she has been denied the basic principle of ‘right to reply’ and believes the action by ET Mensah is “clearly an attempt to portray her as a dishonest person,” adding “ a critical evaluation of the committee’s findings reveals that the report was one-sided, fault finding and witch-hunting but not a fact finding as it sought to portray.”

Responding to the report through her solicitors (Kulendi @ Law), Mrs. Owusu-Amankwa said the whole matter started with one Sam Atukwei, the current Community-based Child Labour Monitoring System Officer of the NPECLC doubling as the Deputy Regional Secretary of NDC who first threatened to ensure that all perceived to be members of the NPP including Mrs. Owusu-Amankwa were removed from the programme.

She said the NDC secretary’s threats came when ET Mensah was not even the sector minister and when he (ET Mensah) became the minister he ensured that Mr. Atukwei’s threats were carried out adding “I do not belong to the NPP. I was with the International Labour Organization (ILO) before joining the programme and made sure the country achieved its target.”

Mrs. Owusu-Amankwa said “the committee radically altered its terms of reference by launching a full-scale enquiry into the activities of the NPECLC without giving us the opportunity to be heard and the result of it is the spurious findings made against Mr. Manu and I.”

“The committee was careful in basing its findings on matters it found convenient to satisfy its avowed aim of discrediting AFC Ghana and refused to report on the technical operations of the NGO and the tremendous impact it had made on children and the communities where it operated.

She said the minister’s capitalization of every opportunity to make false statements to the effect that it was her bad deeds that almost resulted in Ghana being blacklisted by the United States on the issue of child labour in the cocoa industry and that it took his (Minister’s) personal intervention to prevent it is erroneous because the Minister was not even in office when the report was released.

She said the United States report was released on July 20, 2009, seven clear months before ET Mensah was appointed as Minister in February 2010, adding “it was my concerted efforts working with other staff and partners that prevented Ghana’s cocoa from being included in the Executive Order 13126 on the Prohibition of Acquisition of Products Produced by Forced or Indentured Child Labour.”

She said a careful assessment of the report clearly shows that the committee was not independent as it had been portrayed saying “it was clearly tasked to pursue a partisan political agenda which is unnecessary in the affairs of the NPECLC as the officers affected were not given the opportunity to react to then issues only to be reported as facts.”

Mrs. Owusu-Amankwa said “it is sad that a sensitive, complicated and multi faceted issue like child labour in our cocoa sector could be gambled with politics. This is done by no less a ministry than the one responsible for employment and social welfare.”
Posted by Ghana on the move! at Monday, October 25, 2010